The soundtrack of La Leyenda de la Nahuala was originally released in 2007 along with other products of the film. The album was re-released in 2017 on the occasion of the 10th anniversary of the film, however, some tracks like "No es Serio este Cementerio" and "Médico Brujo" were removed for unknown reasons. 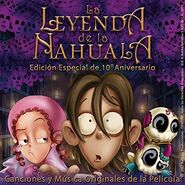 Cover of the anniversary edition
Add a photo to this gallery
Retrieved from "https://legend-quest.fandom.com/wiki/Soundtrack?oldid=33151"
Community content is available under CC-BY-SA unless otherwise noted.