18th Century
The Villavicencio Family, were among, if not the richest family in Puebla, New Spain. However, in the year 1755, as the Villavicencio family were throwing a party, they were attacked by La Nahuala who took the form of a beautiful maid. With the sole exception of Teodora Villavicencio, the entire family was killed on the spot, getting reduced to skeletons in the process. Teodora herself wasn't nearly as lucky, as she died shortly after, alongside Xóchitl when they were magically sacrificed by the demon as part of her plan to become immortal, with Toñita San Juan, her third intended victim being the only survivor. 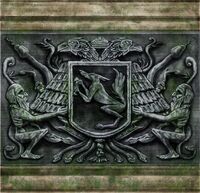 Coat of arms of the Villavicencio Family, as seen in front of their Old Manor
Add a photo to this gallery

Retrieved from "https://legend-quest.fandom.com/wiki/Villavicencio_Family_(La_Leyenda)?oldid=37801"
Community content is available under CC-BY-SA unless otherwise noted.